Up till 2011, Google wasn't known for its social networking prowess. Unless you count Orkut, a social network product that became a phenomenon...in Brazil only. At the end of June 2011 that all changed, with the worldwide launch of (in our opinion) the best social network product of the year: Google+.
It was a muddled launch. Back in March, ReadWriteWeb's Marshall Kirkpatrick got the scoop about a new Google product based on a circles concept. At the time, Google vigorously denied the existence of such a product. But lo and behold, Google+ launched over three months later - and its core feature was indeed "circles." With circles you could better segment your friends, something that was a major pain point in Facebook.
Initially Google+ launched to a chorus of media outlets shouting "Facebook killer." However, it soon became apparent that Google+ was going to be most useful to Google as the social component of its entire online product suite: including Google search, Google Reader and YouTube. Although it's a more than useful standalone social network, too. Particularly for topic-focused discussions. Google+ has grown rapidly, attaining over 40 million users in a matter of months - although just how many are active is a contentious point.
More.....

Could stats benefit from JSON as an exchange format?

The main statistical standards for data and metadata exchange are XML-based (DDI, SDMX, or its semantic siblings: SCoVo/SDMX-RDF...): they are usually complicated and verbose: probably not best suited as an exchange format for apps.
Could stats benefit from JSON as an exchange format? How should data and metadata be expressed?
The goal of json-stat.org is to define a JSON schema for statistical dissemination.
Promoter: Xavier Badosa | Last update: 2011-11-23
Upplagd av Webbredaktör kl. 21:07 No comments: Länkar till det här inlägget

BBC News - Eurozone debt web: Who owes what to whom? 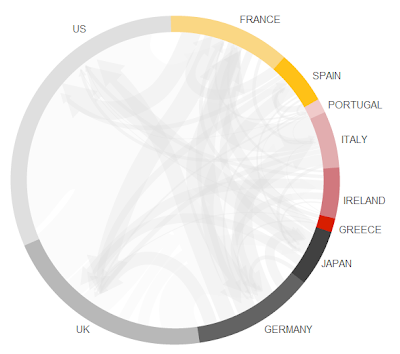 The circle above shows the gross external, or foreign, debt of some of the main players in the eurozone as well as other big world economies. The arrows show how much money is owed by each country to banks in other nations. The arrows point from the debtor to the creditor and are proportional to the money owed as of the end of June 2011. The colours attributed to countries are a rough guide to how much trouble each economy is in.
Upplagd av Webbredaktör kl. 20:50 No comments: Länkar till det här inlägget

OCTOBER 26, 2011PÄR LANNERÖVIEW COMMENTS
Recently, the spoken part of the government data (eg, SMHI weather data, Land Survey map data and the National Post and Telecom Agency's telephone data) should be made ​​freely available for reuse. The two main arguments is that this enables the development of new services that create an economic value, and that it can increase transparency in the public sector. PSI Directive from the EU and the subsequent Act (2010:566) on the re-use of the public administration , has provided entrepreneurs and transparency zealot high hopes.

For several reasons, it is however quite slow. Firstly, not all data in such condition that they are suitable for exposure. It may require both filtering of confidential information, quality processing and infrastructure investment. First, there are sometimes financial interests of the authorities that may seem to speak against the free or cheap APIs. The authorities simply have significant revenues from sales of data and would not release them. Rightly is also questioned the usefulness of publishing all the data transparently. For an already congested authority, it is irresponsible to put resources in an API if no benefit from it!

But government data must not be either massive databases or unstructured word processing document. Regulatory Data can also be simple lists, numeric ranges and codes. For example, the list of names and codes for the country's municipalities, or the current base amount.
The advantage of these simple authority data is that usually they are not classified, not unstructured, not very expensive to produce, nor do they stand for any more revenue that would be threatened if they were released.

Nykvarns municipality was formed in 1999 but is still not in the form of the "National Atlas of Sweden"
In fact, many of them are already free. For example, publishes SCB current lists of counties and municipalities , with the codes, in both HTML, PDF and Excel format. But the purpose seems to be to facilitate the electronic recycling via APIs
There are thousands of forms on different websites where the user is expected to choose their local government from a list - a list that is typically filled with content by the developer once and for all when the form is created. Some years later, some municipalities have been merged or changed names or shared on it, and then form the list is no longer current. I know from personal experience that the need for this type of basic data occurs again and again and again. Last about a week ago, I had in my role as a consultant (an authority) a real need of just the current lists of municipalities and counties.
Other examples of simple authority data are all post towns and postcode, all currencies, names of agencies, degrees and professional certificate, area codes, base, consumer prices and of course the list of all countries and country codes. Did you know the country list that is built into Microsoft's development platform. NET has no Cuba, perhaps because the U.S. does not recognize the state?Perhaps it could be a task for the Institute of International Affairs to publish an API method for those wishing to list countries such as Sweden consider to be country ?

If there was a machine-readable list (XML file or WebService method or the like) at an address that can be expected to be durable and with constantly updated information, it would be fairly easy to build online forms to keep them current. For performance reasons it would usually not be appropriate to retrieve the list each time the form must be presented, but by downloading the list automatically once a day or week or so would the quality be raised in its forms, and related databases.
It is, in itself, with no more effort, to automatically and regularly download the Excel or html file that SCB already publishes and through this bring about what I have outlined above. But for it to be appropriate with an automated clutch, you need to know that the format will not change, the address is permanent and so on. Ideally, the service is available from a trusted actor (preferably agency) over a secure communications protocol as well. And with wise designed version of the sturdy handle changes over time. It is not entirely trivial, but not rocket science. Statistics may not be able to squeeze this in the existing budget, but the Treasury would be a negligible cost compared to other investments of strategic importance to the country's infrastructure.
Can you influence your IT policy to provide any authority that mission? Or is there something better?
About Pär Lannerö Co-founder and consultant at Meta-Matrix Ltd , which since its inception in 1999 worked a lot with metadata on the web (or in "the Matrix", as the interconnected global computer networks are sometimes called before a certain movie la seized on the phrase) to achieve greater efficiency and greater transparency.
Upplagd av Webbredaktör kl. 21:02 No comments: Länkar till det här inlägget

Google Public Data Explorer is really a great tool of practice and exploration if you are doing a course in descriptive statistics. It is a sort of Google Maps - plus. Plus data. It does certain things that WolframAlpha does but interactive and with more data. You can even embed data that you created with this tool in your own webpages or reports.


The Google Public Data Explorer makes large datasets easy to explore, visualize and communicate. As the charts and maps animate over time, the changes in the world become easier to understand. You don't have to be a data expert to navigate between different views, make your own comparisons, and share your findings.
Try it yourself here: http://www.google.com/publicdata/home
Upplagd av Webbredaktör kl. 21:53 No comments: Länkar till det här inlägget

Stockholm University, Department of Computer and Systems Sciences, was running a research project on Citizen-centric Access to Statistics. Project manager was Professor Bo Sundgren, former advisor to the Director General of Statistics Sweden. Contact Alf Fyhrlund, mailto:alf.fyhrlund@gmail.com, if you want to be a member in our open network or contribute to this blog. See also Facebook group
https://www.facebook.com/groups/stataccess/